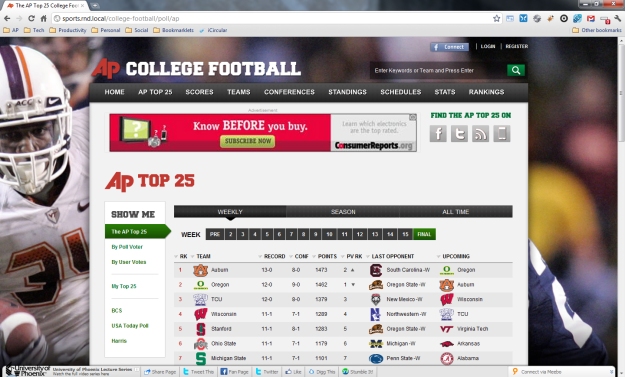 This post is long overdue, but is still significant.  The new Associated Press College Football Hub web site is now in production (As of August 21).  It  is stable, is recieving traffic, and the data is flowing.  This site is the new home of the AP Top 25 poll, which is updated each Sunday afternoon, along with th Harris Poll, the BCS Poll, and the USA Today Poll.  Youc an even submit your own version of the poll, if you think the sports wriers got it wrong!  You can see the site now at http://sports.ap.org/college-football .  You can also see the press release announcing the launch of the site at http://www.ap.org/pages/about/pressreleases/pr_082310a.html.

This site is a significant evolution of the Winter Games and World Cup site, integrating with our new Press Pass Registration Service, as well as major enhancements from the Content API to include college football data.  Some of the new technologies that are being implemented in this site include cufon (for font amangement), prototype and jQuery, WebTrends and Google Analytics, the WebPurify profanity filter service, as well as tight integration with Facebook and Twitter.

Check it out!  Let me know what you think!  Leave me some feedback!